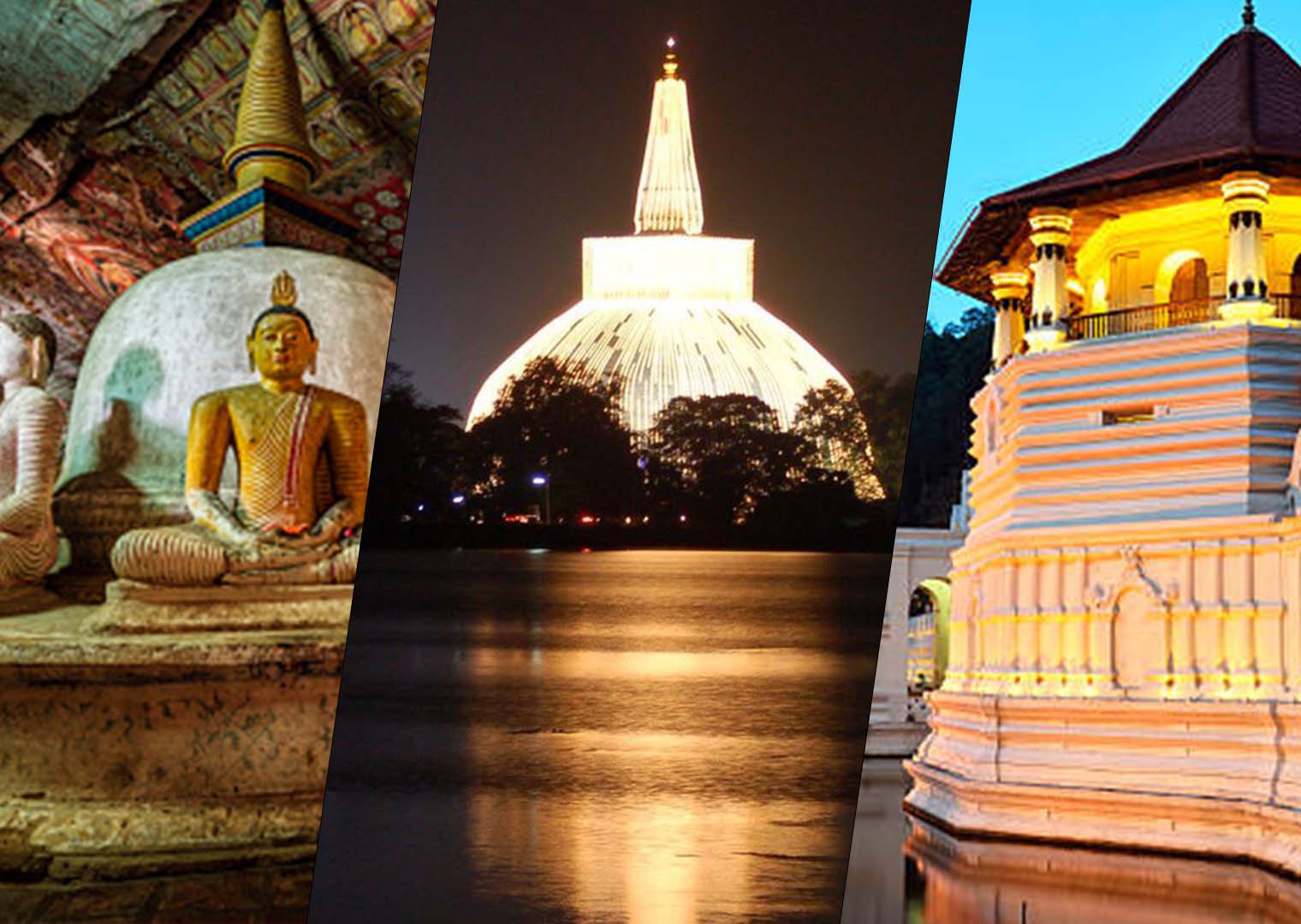 The Sacred City of Anuradhapura is one of the most important Buddhist sites in Asia.  The kings who ruled the Anuradhapura Kingdom after Arahant Mahinda introduced the Buddhist philosophy to Sri Lanka have created many religious creations here.  This land was used by the ancient kings as the royal garden called the “Great Cloud Forest”.  The main Buddhist shrine here is the Sri Maha Bodhi.  In addition, there are many other famous shrines such as the Ruwanmali Maha Seya.  Buddhists from all over the world come here to visit and worship at these places.  Here are some of the ones I found to be interesting:

02. Temple of the Tooth in Kandy

The Temple of the Tooth is one of the most visited tourist attractions in Sri Lanka.  This historic place is located in the heart of the beautiful city of Kandy.  The Temple of the Tooth was built during the Kandy Kingdom, the last kingdom of Sri Lanka.  The right jaw teeth of Gautama Buddha reside here.  An annual procession is organized here in the month of August.  It is very colorful with a lot of traditional cultural elements.

The Kelaniya Rajamaha Viharaya is one of the most famous and sacred places in the vicinity of the city of Colombo.  History has it that the Supreme Buddha visited this place and helped to resolve a dispute over a jeweled chair.  This temple is still a major tourist attraction.  A large number of them are local and foreign Buddhists.  It can be seen that this temple has contributed to travel photos and travel videos all over the internet.  The area is famous for its Buddhist heritage as well as the Naga tribes who are believed to have inhabited Sri Lanka and India in the past.  Especially during the time associated with the legend of Ravana, a very prosperous trading town was located in the vicinity of Kelaniya.  Therefore, tourists who are interested in it also visit here frequently.

Gal Viharaya can be identified as the main Buddhist tourist center in the ancient city of Polonnaruwa.  Three statues of the Supreme Buddha have been erected at this place.  What is special about these three statues is that they are made of stone.  The period during which these statues were created is known as the Polonnaruwa Kingdom period.  The standing posture, the sitting posture, and the lying posture are thus engraved.  History states that many Arahants lived in this place in the past.  A large number of tourists visit this place every year and non-Buddhist tourists also visit this place.

A good understanding of the ancient art of Sri Lanka can be obtained by looking at the stone carvings of Sri Lanka.  Among them, the Aukana statue can be identified as one of the most important and most visited places.  This statue is made entirely of black stone.  This statue was created using the standing posture of the Gautama Buddha.  History has it that this was created by a stone carver named Bharana in the past.  This statue is located near the large lake ‘Kala’.  It was created using special scientific methods so that the statue would not be damaged by rainwater runoff.  There is also a guide at that place to learn more about it.  Visit our YouTube channel to find out more about this place via video.  (The relevant link is at the bottom of the website.)

Many people who have seen the Hollywood documentary ‘Monkey Kingdom‘ have been curious about the location of the film.  That place is the Medirigiriya area in the Polonnaruwa district.  The Medirigiriya Vatadage is located there.  There is a statue of the Supreme Buddha in the center and a safe house has been built around it for its protection.  It is said that this design also belongs to the Polonnaruwa period.  This place is very popular among foreign tourists and many people use it for photography.  This place has become very popular on the internet because of those photos.

Sigiriya is a major tourist destination in Sri Lanka.  The Dambulla Cave Temple is the next most popular accommodation for many who visit Sigiriya.  Built in a rock cave, this temple is famous for its statues, paintings, and carvings.  Especially foreign tourists who come to this country are amazed to see the creative talents of this place.  Buddhists as well as other tourists make this place a must-visit destination.

Gangarama Temple and Seema Malaka are some of the most popular tourist attractions in Colombo.  This place is well known as a must-visit destination, especially for local and foreign tourists.  Gangarama Viharaya is one of the leading temples in Colombo.  This temple has many beautiful features.  Especially the boundary stone built in the middle of Beira Lake is also famous among many people.  At Seema Malaka, you can take many beautiful photos of Colombo city.  There is also an annual procession at the Gangarama Vihara.  That was in January.

Pidurangala is one of the most visited tourist destinations on Instagram and is also a place of Buddhist heritage.  The story here is related to the history of Buddhism.  According to history, about 60 caves have been built at this place.  Although there is a lot of interest in taking photos, this place is also a revered Buddhist shrine.