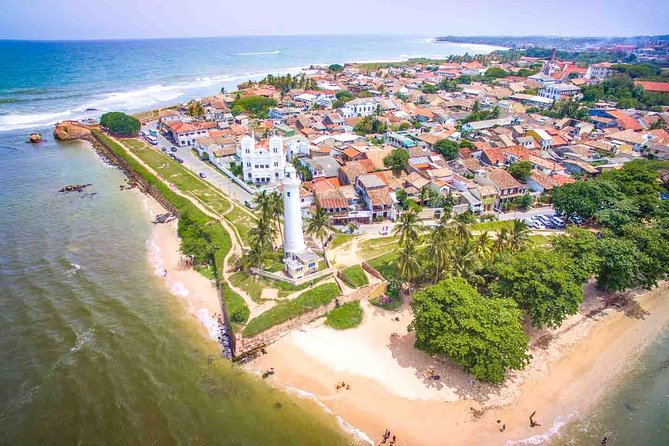 I first came to Galle Fort about 13 years ago on a school trip.  Since then I have visited Galle Fort several times, probably because its beauty is etched in my mind like an eternal painting.  I am not the only one who loves Galle Fort so much that is why many foreigners spend a few days in Galle Fort during their visit.  Galle Fort is also known as a city of ancient value beyond beauty.  I am ready to tell you about it in this article.

“If you want to go to heaven, come to Galle and eat some prawns with drinking king coconut.”
– Tony Greig (Veteran cricket commentator)

That is how the cricket commentator told the world about the beauty of Galle through his microphone.  Galle is so beautiful.  The eyes must be fortunate to experience the beauty shown to us by the great ocean ascending or making noise on the Dutch fort.  From the soil are ancient buildings and structures dating back to the colonial period.  The sky Beautiful kites can also be seen from the upper sky of Galle Fort.  Below is the Galle International Cricket Stadium.  School children come here regularly for excursions.  With all this, Galle Fort becomes a very beautiful place.  This beauty cannot be described in words and if you look at it with your own eyes, how much more can you experience it?

The history of Galle Fort is not limited to the Dutch or the Portuguese.  Even before the birth of the Supreme Buddha, that is, Cree.  BC  History has it that the world’s leading spice export center was located in Galle around 1400.  Cruy in Jewish History.  BC  970 BC  King Solomon, who ruled Israel until 931, is said to have taken ivory and peacocks from Galle.  Galle is named after the Ging River, the capital of the world-famous map of Ceylon drawn by Ptolemy, and the capital city of Galle.  150 is one of the most famous places in the world.  Historically, the Ging River trade area was well known in the past.  It is also mentioned in history as a major accommodation for carters.

Later, for the first time, the Portuguese invaded.  In 1505, Lorenzo de Almeida landed at the port of Galle.  The invaders later built its fort.  The Dutch, who later attacked the Portuguese and captured the Galle Fort, developed and fortified it.  This is the complete fort built by the surviving Dutch.  It was declared a UNESCO World Heritage Site in 1988.

What to look for

The only door left for visitors to and from the Galle Fort is the entrance at the corner of the present Bala Daksha Mawatha.  The road near the Galle Cricket Ground is a later construction.  It is noteworthy that the roads associated with the Galle Fort still bear the same names today.  Dutch and English architecture can still be seen on both sides of the road.  The large building near the ancient entrance to the Galle Court was used by the Dutch in 1669 to store spices.  Today its naval museum can be seen.

On your way to Galle Fort you will also see the Dutch Protestant Church.  It is an ancient building in Galle Fort.  Its floor is completely covered with tombstones.  Galle Fort is also home to the oldest tourist hotel in Sri Lanka.  Built in 1694 as the governor’s official residence, the building was later renamed the New Oriental Hotel and is now known as “Amangalla”.  The oldest breadfruit tree in Sri Lanka can be seen near the Dutch Hospital.

We are confident that you will never see the beauty of Galle Fort again on any beach in any country.  That is why I still want to sit on the Galle Fort and look at the distant horizon.  I hope you will not forget Galle Fort on your next visit.