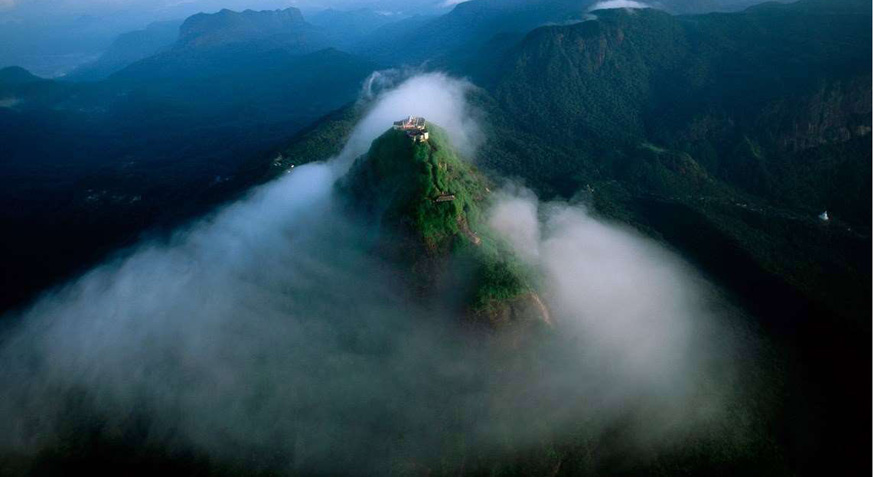 An Introduction to Sri Pada mountain.

Moreover, this mountain is, even more, special because of the footprints of the Supreme Buddha on the top of this mountain.  In addition, this mountain peak is known as a place where one can see a large area of ​​Sri Lanka at once.  This mountain is also seen in many places in Sri Lanka.

This mountain provides water sources for 3 major rivers in Sri Lanka.  All three rivers begin at the top of this mountain.  They are Kelani River, Walawe River, and Kalu River.  It is believed that the origin of the Mahaweli River originates from this mountain in the past and later it was mentioned that the Mahaweli River originates near the Horton Plains.  However, Sri Pada mountain is one of the major watersheds in Sri Lanka.  There is also a large variety of animals ranging from wild elephants, leopards, small butterflies, and many species of birds.

Many people who visit Sri Pada travel by various routes. These are two of the most popular routes.  These are the Kuruwita – Erathna road and the Hatton – Nallathanniya road.  Most of them choose the Hatton – Nallathanniya road.  Hatton Road is the shortest and most convenient route.  The Kuruwita Erathna Road and the roads across Ratnapura are considered to be the most beautiful roads.

Traveling along Hatton Road, you can take off the train to Hatton Railway Station and from there take a bus to Nallathanniya.  From there you can start hiking on foot.  You will find many unique places and activities on this mountain.

It is not possible to travel to see Sri Pada at any time of the year and one can visit every year from Poya Day in December to Poya Day in May.  Tourists do not visit Sri Pada from May to December due to inclement weather.  Very few people visit during the off-season and must be prepared to face the rains and animal movements that occur throughout the season.

During the Sri Pada pilgrimage, electric lights, as well as various shops, can be seen along these roads.  They give tourists the opportunity to soothe their tiredness with love.

The religious significance of the Sri Pada pilgrimage season

History states that the Supreme Buddha first visited Sri Lanka three times.  On the third occasion, the Supreme Buddha ascended to Kelaniya, at the invitation of Sumana Saman, the then Governor of Ratnapura.  Sri Lankan Buddhists as well as many people from all over the world have been visiting this place annually for over 2500 years since then.

There are other opinions about this mountain in other religious environments as well.  Accordingly, Hindus believe that the base of the mountain belongs to Lord Shiva or Hanuman.  Muslims and Catholics also believe that this foot is the foot of Adam.

Location and history of Sri Pada

Sri Pada is located in the Ratnapura District.  This mountain is located very close to the Nuwara Eliya district.  About 2500 years ago, the area was ruled by a ruler named Sumana Saman.  It is said that the Supreme Buddha traveled to Ceylon at that time and at the request of the Governor of the Province, the Supreme Buddha placed his footprint on this mountain.  Later people from all over the country started coming to this place to worship the feet of the Supreme Buddha.  In the early days, there were no planned roads like today and they have made this journey along a very dangerous road.

You can also see a variety of flora and fauna on this trek.  This mountain is especially special for butterflies.  That is why this mountain is also known as Samanala Kanda by some.  The mountain is home to many other wildlife including wild elephants, leopards, and others.  It is noteworthy that a species of black leopard that is considered to be endangered in Sri Lanka was recently found in this area.

The most beautiful experience when visiting this area is during the off-season.  But traveling at that time was a matter of great security risk.  Recently, the Sri Pada Off Season tour has become popular among the youth.

10 places for a holiday in Badulla – Ella area